Brian DeConinck will be joining us at WPCampus 2017 to share about Mobilizing 300 reluctant content creators. You can see him in action on Friday, July 14 at 4:15 p.m. 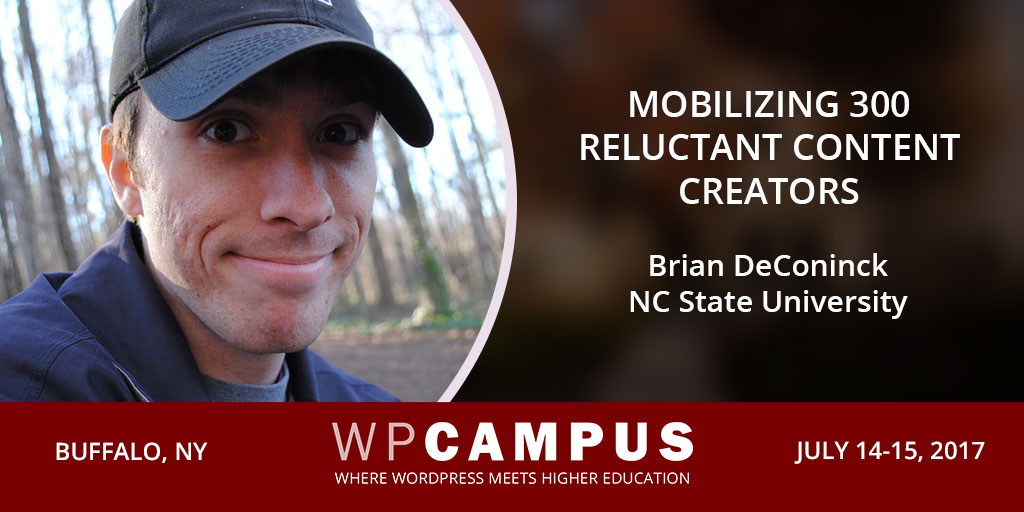 Tell us about your first website or digital project. What was the spark for you?
My first website was a GeoCities site when I was 8 years old. I tinkered on and off in middle school and high school and built lots of deeply embarrassing websites, but I knew just enough to be hired as the undergraduate webmaster at Northwestern’s student center. That’s where I built my first WordPress theme, and I’ve never looked back.

Why higher education? (whether you work in it or with it)
I took my job at NC State because it was the right fit at the right time. My wife was getting her PhD with NC State’s math department and we didn’t have a car, so a job where we could walk to campus together every morning and hold hands was a great opportunity. We’re pretty adorable.

But I’ve found higher ed incredibly satisfying. I do interesting, challenging work, and I work with people who really care about what it is that we’re doing. I don’t always feel directly connected to the teaching or the research side of NC State, but it’s a great feeling when I see something that I did have an impact across a 50,000 person community.

And besides that, it’s so nice to design websites that don’t have 40% of the screen real estate taken up with ads. That’s the worst.

Tell us about the topic of your session. Why is it important to you?
Our central IT unit (OIT) is a big, sprawling unit that touches everything one way or another. Communicating our message to campus is a challenge under the best of circumstances. But thanks to some (ahem) budgetary history and (ahem ahem) staffing changes, we don’t have anyone in OIT whose job responsibility is keeping content on the unit website up-to-date.

Several years ago (long before I was hired), the decision was made to give everyone in OIT content creation and editing permissions. The expectation was that everyone would pitch in to keep the parts relevant to their work updated.

That turned out about as well as you could expect—if everyone owns the website, no one owns the website. Content was out-of-date and hard to find, and basic quality control and accessibility were huge problems. So this is the story of:

… with no changes in staffing—there’s still no one who’s job it is to own that content and keep it in good shape.

I’ll be describing our distributed ownership governance model, how we arrived there, and the homegrown plugins we built to tie it all together. I’m guessing (hoping!) there’s no one who will listen to my talk and think, “Wow, that’s exactly what we’re going through!” But we learned a lot of good lessons that I think are pretty broadly applicable.

This project consumed my life in a pretty unhealthy way, so my talk is half sharing my experience with the WPCampus community, half higher ed group therapy. My job is usually a front-end designer/developer first, WP admin second. Those were a big part of all of this, but also took me deep down the road of governance, politics, content strategy, and more. It was an opportunity to grow and learn, and it was all so exhausting.

Some people who don’t tweet often anymore but I still follow because some day, if they start tweeting again, I know it will be worth it:

Why do you ♥️ WPCampus?
We have a pretty small team, so at work, many of the people I interact with don’t have the experience or the background knowledge to understand the details of building websites with WordPress—what’s interesting, important, easy, difficult, etc.

Outside work, the web development people I talk to at conferences or meetups often don’t really understand the higher ed dynamic. It’s not a big corporation, and it’s definitely not K-12. But it’s got some of the best and worst parts of both, plus this whole other higher ed culture thing that’s hard to explain. People tend to misjudge the scale of what we do, both technically and organizationally.

At WPCampus, I don’t have to explain any of that. It’s a pretty amazing feeling to talk to people who understand what’s hard about what you do, and also understand why it’s special.

If someone designed a wapuu for you, what would it look like?
Lately I’ve been feeling a lot like Sleepy WordCamp Wapuu. But my wapuu would wear mortarboard like the eduwapuu and be holding a studio mic because oh my goodness, I can’t believe I forgot to mention the WPCampus Podcast until question #6! Which you should listen to! And be a guest on! Because I’m the host! And I’d like to talk to you!

What WordPress, or other, tool can you not live without?
I would be totally lost without GitHub. And GitHub Updater. We’re moving away from GitHub Updater and toward a homegrown tool that folks in our engineering school built, but I don’t know how I’d do my job without some way of deploying code from GitHub to our sites, and then quickly reverting back to a stable version when I realize my changes broke everything.

View all announcements
Sessions were recorded and have been uploaded. View the schedule or visit our main videos page to view the videos. 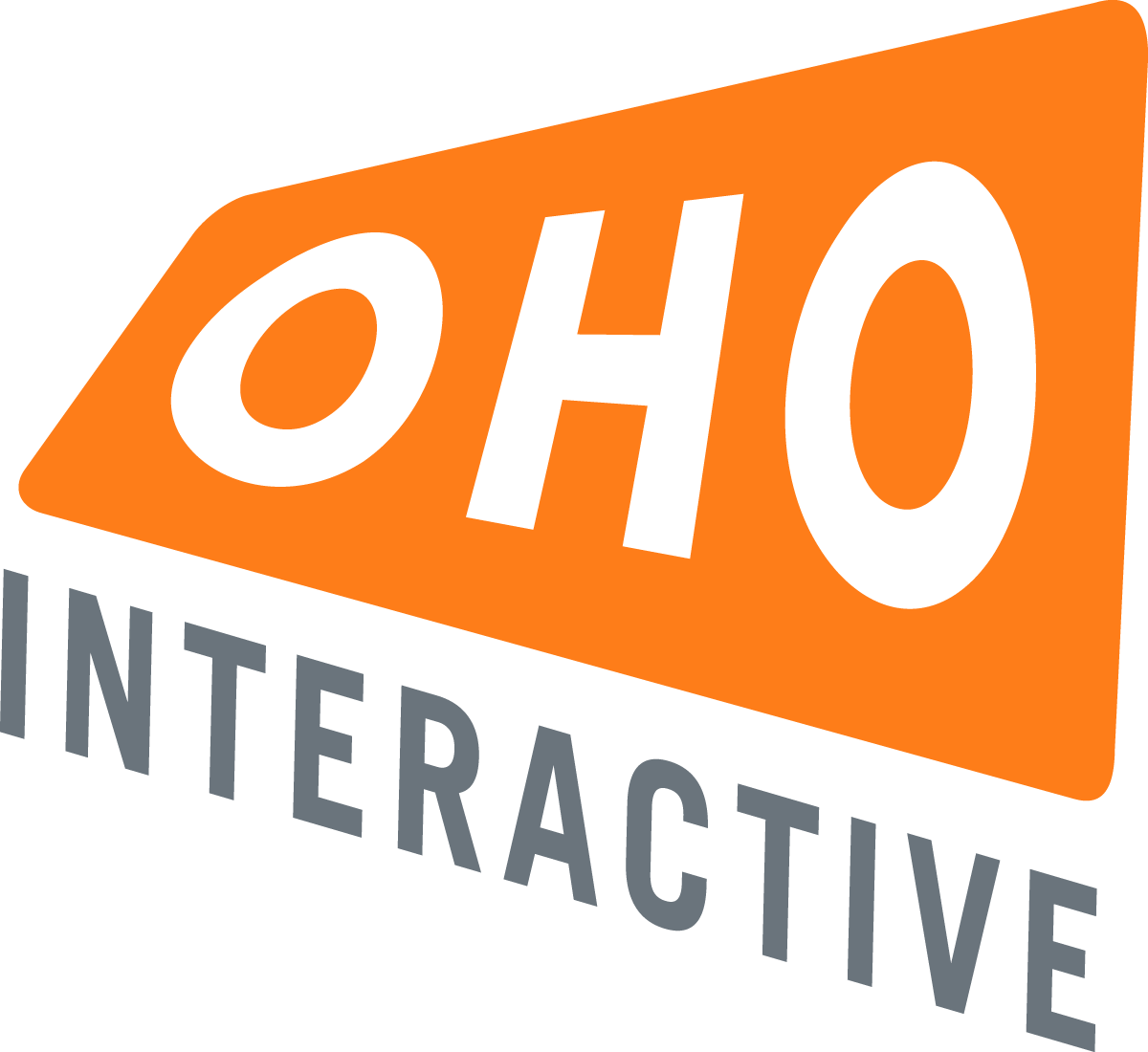 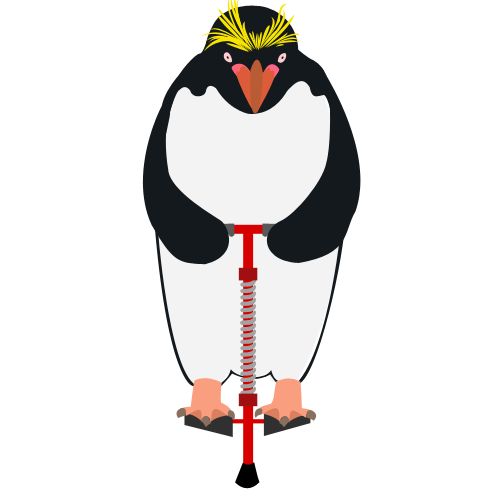 Enter your email address to receive notifications about WPCampus.